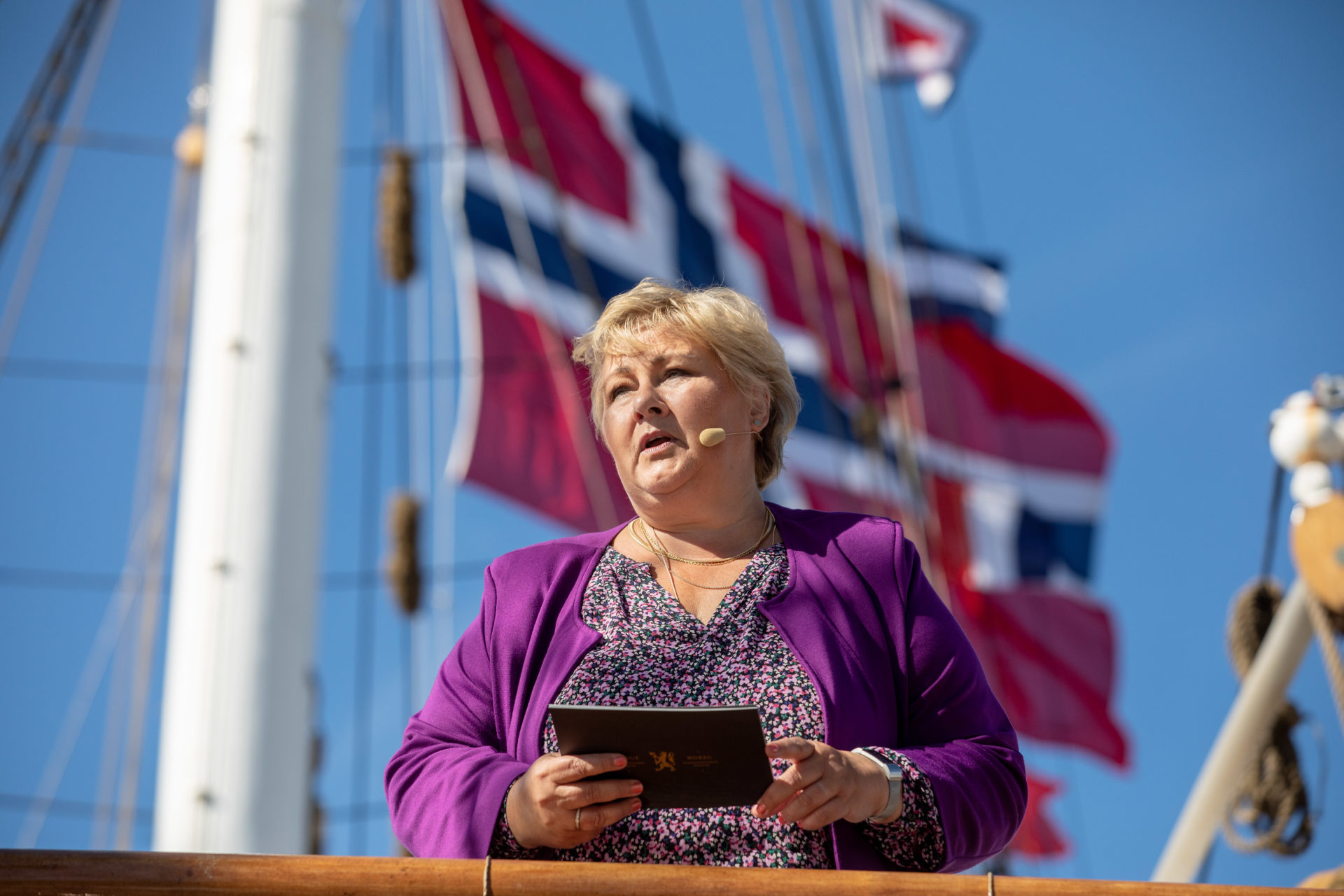 The Prime Minister launched the One Ocean Expedition

The Prime Minister of Norway, Erna Solberg, initiated the official launch of the One Ocean Expedition on board the tall ship Statsraad Lehmkuhl.

The One Ocean Expedition 2021-2023:
– Statsraad Lehmkuhl’s first circumnavigation of the globe
– Starts in August 2021, lasts for 19 months
– 55,000 nautical miles, 36 different ports worldwide
– Purpose: To create awareness and share knowledge about the crucial role of the ocean for a sustainable future
– A part of the UN Decade of Ocean Science
– Parts of the expedition are open for anyone to join

On August 20, exactly one year before the circumnavigation commens, the official launch of The One Ocean Expedition took place in Bergen, Norway, on the main deck of Statsraad Lehmkuhl.

Haakon Vatle, CEO of the Statsraad Lehmkuhl Foundation, was thrilled to reveal the plans for the largest project in the ship’s history.

“A circumnavigation of the globe is a dream come true for many of us. But this project has taken on a much deeper meaning and become an expedition. Our goal is to build and share new knowledge about the ocean, and be a floating ambassador for the seafaring nation Norway”, Vatle said.

The event was attended by ministers, the mayor of Bergen, the county mayor and other prominent guests. Prime Minister of Norway, Erna Solberg, is one of three goodwill ambassadors for the circumnavigation.

“I think The One Ocean Expedition is a fabulous project because it provides a platform for discussing many of the major ocean issues with people from all over the world. We need people who can create knowledge of and engagement about the sea. Therefore, it was natural for the government to enter a collaboration with the One Ocean project”, Solberg said.

The Prime Minister emphasized the importance of research and new knowledge about the ocean, in order to reach the UN sustainability goals.

“The ocean holds the key for reaching many of the UN sustainability goals related to poverty, hunger, energy and health. But the ocean is also under strong pressure, from climate change, the loss of biodiversity, overfishing and pollution” Solberg said.

For nineteen months, Statsraad Lehmkuhl will sail fifty five thousand nautical miles and visit 36 ports worldwide. Scientist and students will fill most of the laps, but parts of the expedition will be open for anyone to join on board.

Visit the One Expedition website for the complete sailing route! 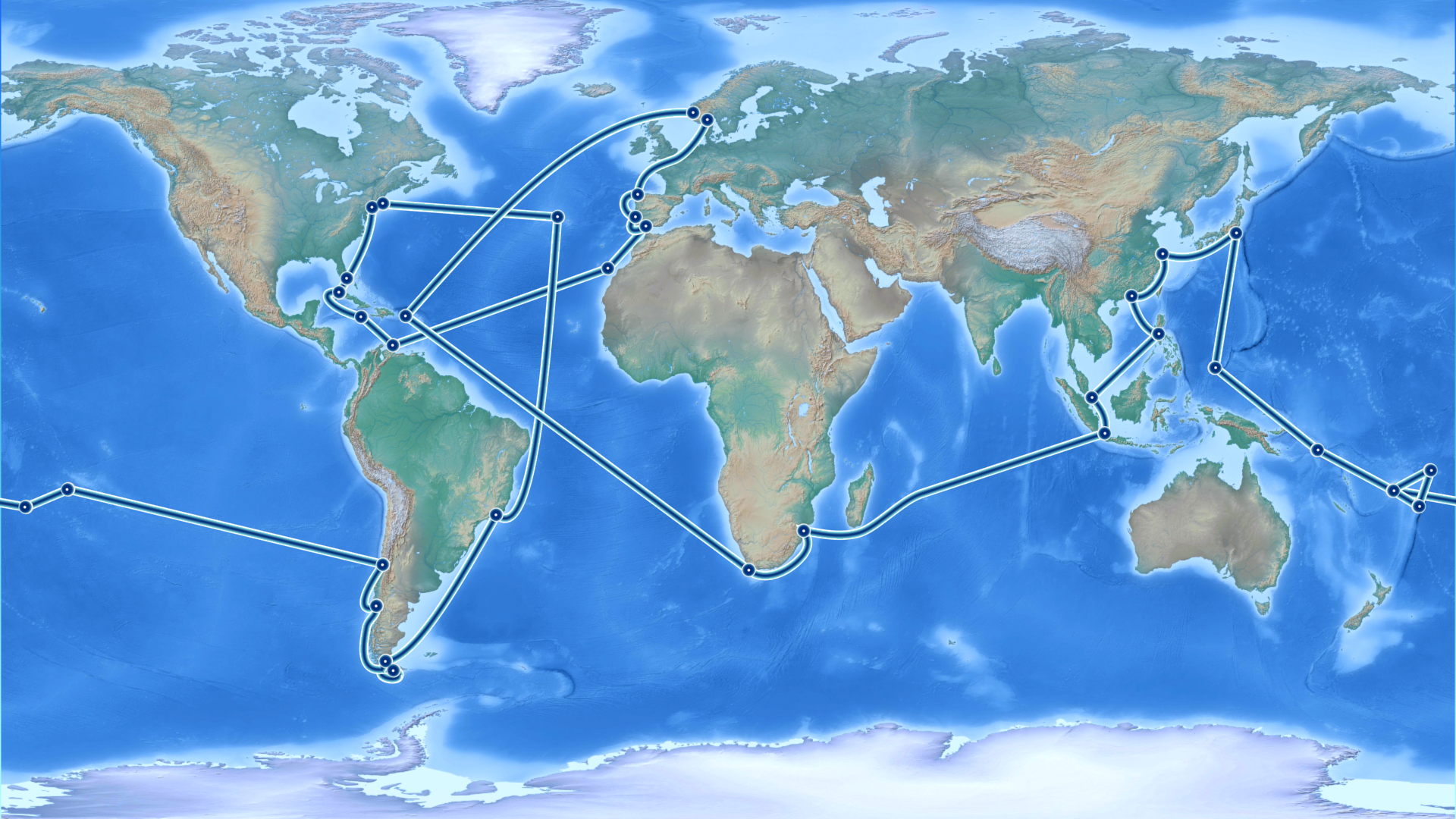 Knowledge, education and diplomacy
As part of the UN Decade of Ocean Science, Statsraad Lehmkuhl will serve as a sail training ship and a state-of-the-art research vessel. Using advanced equipment, students and scientists will conduct research and monitor the sea throughout the voyage. Specialized study programs, focusing on sustainability and young leadership will be held on board.

When in ports, Statsraad Lehmkuhl will be used for conferences, diplomacy, high level meetings and corporate hospitality, partly in collaboration with the Norwegian embassies.

– The Norwegian embassies look forward to working with One Ocean to create awareness on the ocean´s crucial importance to humanity, Solberg said. 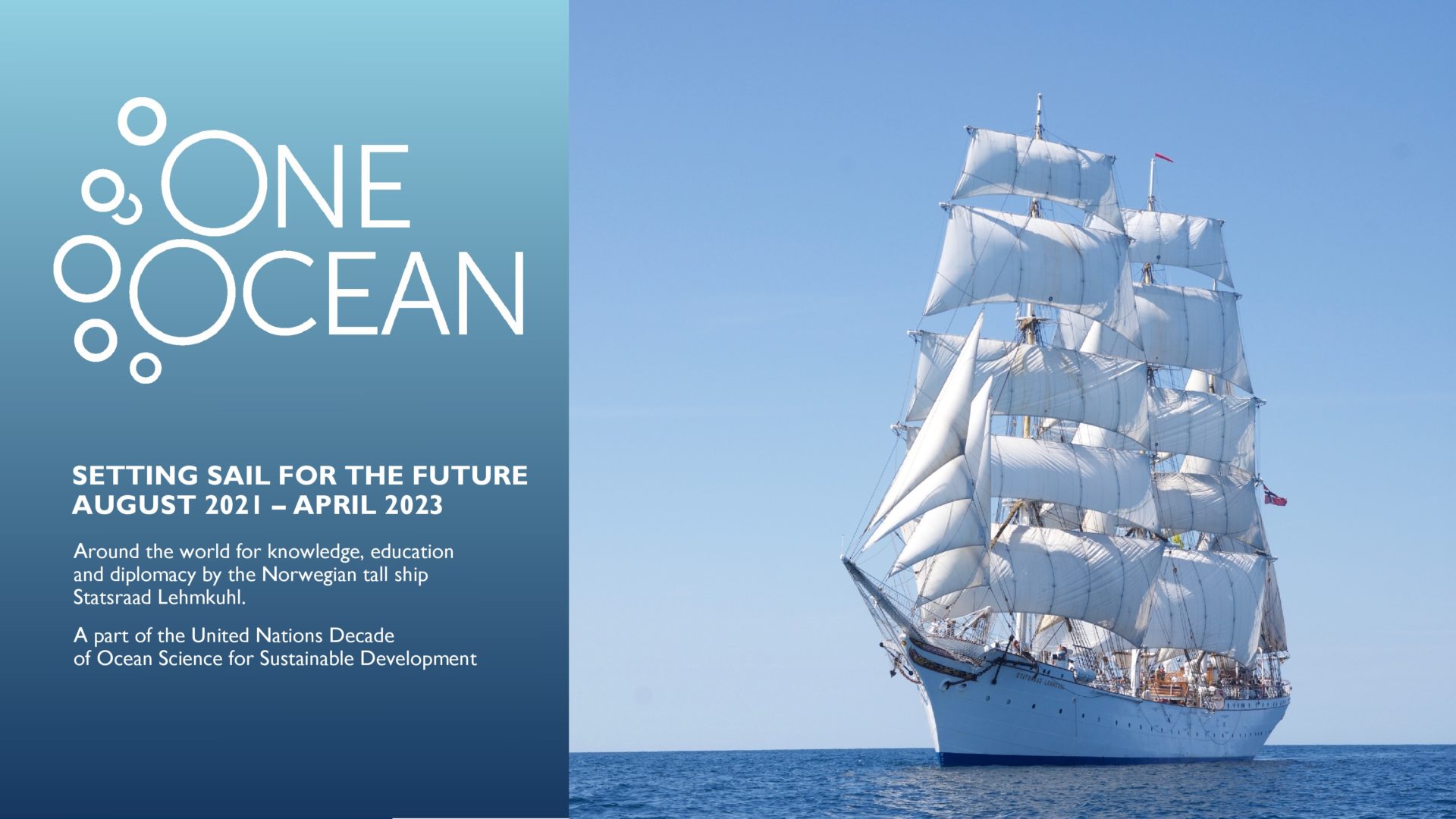 The Prime Minister looks forward to see how the expedition can contribute to ensure clean, fresh oceans.

“One Ocean will unite scientists, young people, authorities, business leaders and the civil society to a joint acquisition of knowledge about the ocean. They will learn from each other and from the experiences they share on the expedition, whether it is in Havana, Valparaiso or Fiji. This will make them dedicated future ambassadors for a clean, healthy and productive ocean”, Solberg said. 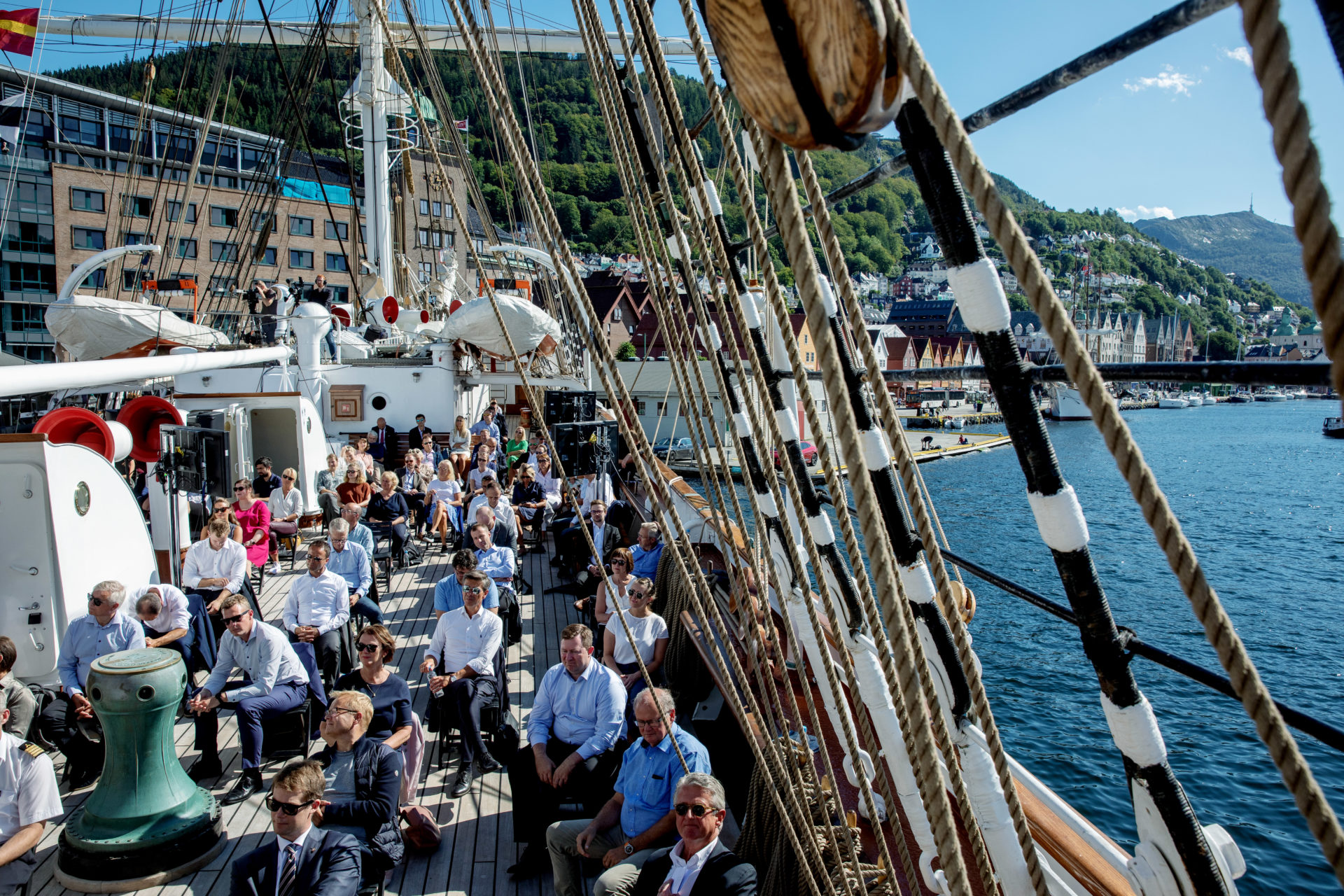 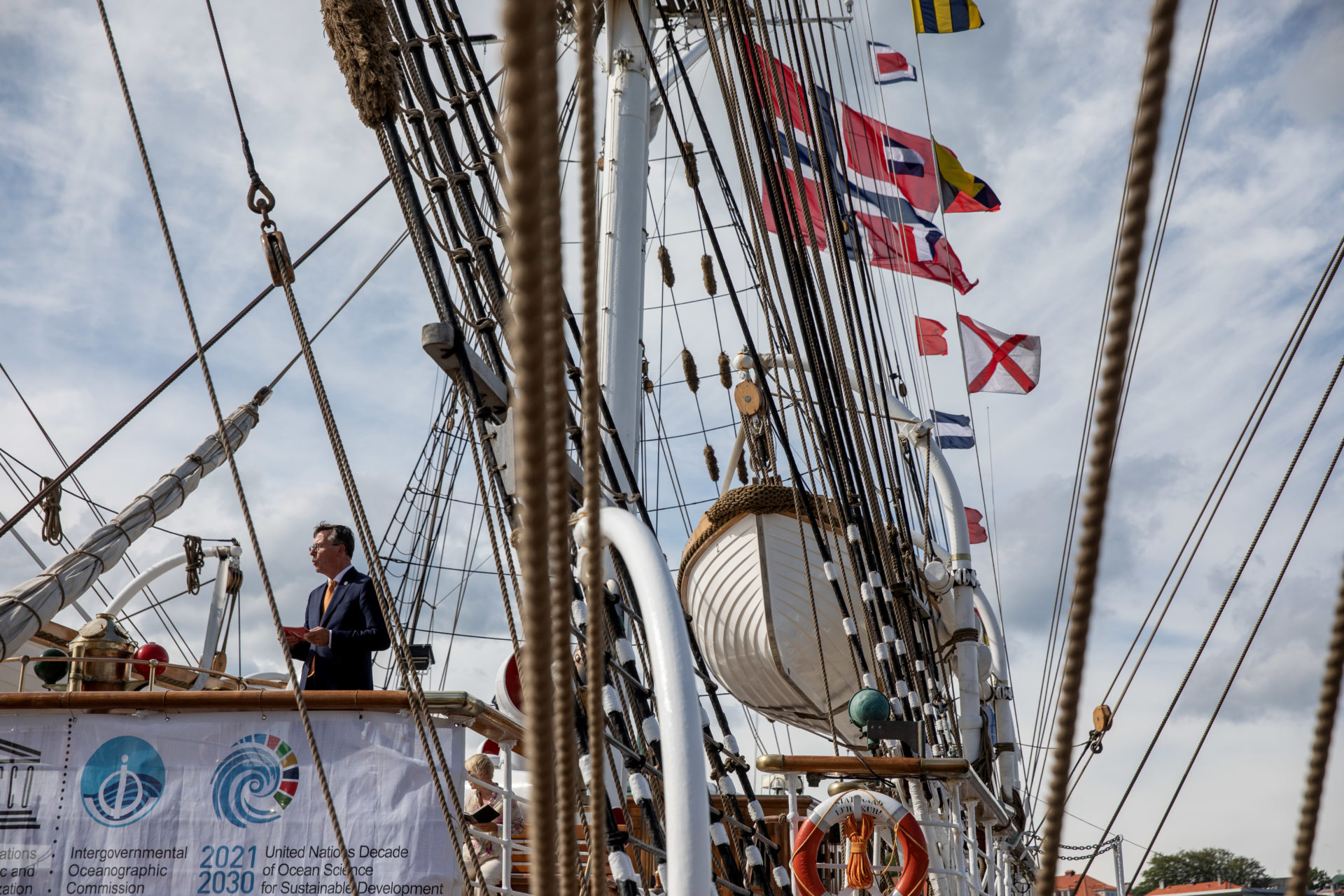